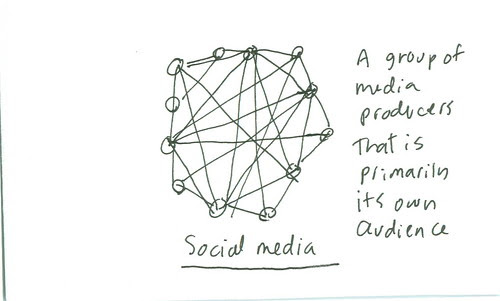 Why doesn't the typical meeting work for you anymore?

Why, when you see the laptop come out and the lights start to dim, do you feel a vague sense of dread?

Maybe it isn't so vague?

What is social media? I think of it as a group of media producers that is primarily it's own audience.

I was first introduced to this idea by Alex Vieux of Red Herring, who defined the Red Herring media ecosystem as a global social network of entrepreneurs, technologists, and financiers who were primarily interested in each others' activities and ideas.

A short while later I sat next to Ross Mayfield of Socialtext, who for three days running attempted to convince me of the power of wikis -- I am sad to say, without success. Those of you who know me are aware that I can be quite slow on the uptake sometimes.

Later I met Jerry Michalski, who is so passionate about social media that he named his company Sociate.

You wouldn't be reading this if you weren't already connecting to the world of social media. Which is why, I submit, that meetings of the traditional type don't work for you any more. You're no longer a couch potato, watching TV in the evening, being spoon-fed your media. And you don't want that role in your business meetings either.

You've become a part of the social media ecosystem. In addition to being a consumer of media, you're now also a producer. You've become accustomed to having a voice in the conversation. Social media is a clear phenomenon and it isn't going away.

So you can imagine my surprise when I searched the web for a simple, clear definition of social media and came up empty.

My definition is in the picture above.

Interesting concept, having a bunch of media produced that is mostly targeted at like-minded people who are, themselves, producing media. I hadn't put that lens on it, but that really is a fascinating vehicle for communication. Sort of like a cross between sharing and promoting.

I'm really engaged with the idea of people forming content networks, collectives of complementary and like-minded materials into packages that are easier to find, easier to consume, and that add value through their aggregation. That's social at its roots, both from the creators' side, as well as from the folks consuming, as they themselves have access to add to the content, were they so inclined.

Maybe it could be defined as an ever-increasing volume of media, perpetuated by itself.

I like the idea of user level inter-operability, but it doesn't make sense seeing as only a fraction will be contributing. Only when they feel personally responsible for correcting or elaborating on what is already there.

Hi Dave
I have nothing to add on.
You are the expert and I salute you for your excellent visualization.
What I did is, I posted your idea on my Blog, along with the other similar content (I found today).
Please leave your visual signature on my blog, so that the cycle is complete (in other words: what comes round, goes round).
Best, Mohamed

This is phenomenon what Lawrence Lessig calls Read-Write Culture or Read-Write Internet. His focus is not so much on the creative side as the legal and ethical obstacles to producing derivative works caused by modern-US copyright law.

It's an interesting shift of human behavior that I hadn't recognized until it was pointed out in one of Lessig's videos: some content on the internet is produced for other producers. It's not intended for "consumption" but for other people to extend and create more works to fuel the network.

If you're concerned about the legal impediments to future growth of that kind of culture, I recommend checking out Lessig's writing, the Creative Commons and the EFF.

I'd call it "natural communication."

Sit a bunch of people down in a group, and start storytelling. While there may be one main speaker, if they are truly great, they pull material from their audience. They weave things relevant to the listeners into the story, and probably get those present to participate.

Humans aren't built to live in Broadcast Culture, where information is sent to them and must simply be absorbed. We're designed to collaborate with the people around us, and the closer media gets to that, the more people will embrace it.