Mr. Fixit and the power of packaging 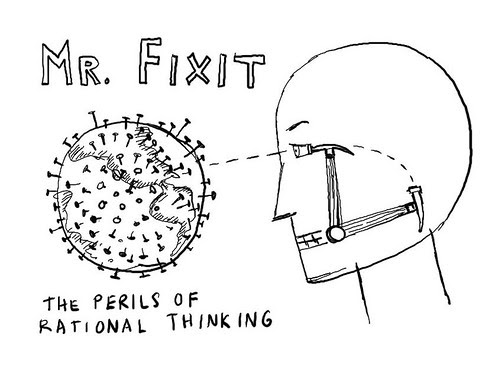 Reason is a dangerous, two-edged sword. It can be seen as Newtonian thinking in a quantum world; a cause-and-effect approach in a world that's more complex than that. In relation to that concept I'd like to make two points, one about humanity and the other about reason.

The idea that we are somehow logical, rational or reasonable creatures is a broadly accepted one, yet under close examination it appears completely ridiculous. Yes we are capable of using reason as a tool, but more often than not we ignore what reason tells us and tend to favor other biases, especially cognitive biases. We forget that we are not designed for reason so much as propagation and survival. Take a look at classical game theory, which presupposes that people will act in their own rational self-interest. Turns out that predictions you make based on this assumption go radically wrong. We make decisions based on other factors such as fear, doubt, paranoia, desire, greed, even altruism. Any sales or marketing person can tell you as much from personal experience. The best products don't win: Coke failed the taste test and Microsoft isn't the best operating system. This is not a bad thing -- our non-rational decision-making processes tend to work very well and protect us from harm in a lot of cases. It's just that there are deep blind spots that may actually drive us to extinction, which I think is what concerns many of us.

Reason is the best tool that we know of for overcoming our blind spots. I use the word tool for a reason here: A tool is something that's designed for a specific purpose and has certain ideas (about its use) built into it. A hammer sees everything as a nail, a saw wants to cut, etc. Reason, and the empirical method, can be seen as a set of tools based on a theory about the world: that everything is, or potentially can be, understood in rational terms. Yes, the current state of the tool is primitive when it comes to understanding complex relationships and ecosystems, but we are making progress. The quantum world, to make an example, was not discovered by mystics, it was discovered by physicists using empirical techniques. Complexity theory is making great strides toward understanding how nonlinear systems and complex interactions work. Brain science is advancing rapidly these days and helping us make similar strides toward understanding the fallibilities of our senses and cognitive functions. So let's not give up on reason.

At the same time let's be sure to understand its limitations. Philosopher of Science Paul Feyerabend advocated a separation of science and state to parallel the separation of church and state. Science, he thought, has enough power, pride and hubris to rival any social structure, religion or philosophy that opposes it. I might not go so far but I do think we need to remember that reason and empiricism are tools, and like any tools, they have their limitations. Reason cannot tell the carpenter what to build or what not to build, or why. Science and technology may influence destiny but they cannot tell us who we are or where we need to go. They cannot shape a vision or offer moral guidance. Reason can't keep a family together or avoid conflict within a community.

This gets to my main thesis here, which is that reason must be understood in context. I happen to like simple rules such as

First do no harm.
Seek to first to understand, then to be understood.
Leave no trace.
Do unto others as you would have them do unto you; and its corrollary: only if they want that!

Reason is super-effective but also alien to many people who are following the powerful survival-cues of their biological brains, and one thing that seems to be true over time is that the simple memes like those above appeal to the intuitive common sense of the common mind. To be clear: I'm not arguing against reason but for better marketing of it!

Can we package the idea of a rational world in simple terms? Can we employ the simplicity of Haiku for example?

The great philosophical and religious leaders were able to convey their messages in short simple stories and sayings. Why not reason?

As we say around here sometimes:

In theory, practice and theory are the same.
In practice, they are different.

Religions exists for a reason: to make sure the sheep obey the simple rules that make societies work.

Interesting. This article in Wired about the anti-vaccine movement talks about science and reason vs. the tide of trendy thinking.
http://www.wired.com/magazine/2009/10/ff_waronscience/

I read that same Wired article, then this post. As the article and this post say, reason has not done a good job of communicating/selling itself. Often the problem, reason-focused people demand understanding by the non-reasoners. That's usually an unfulfilled desire.

I'm not sure the answer is just simple messages, though it might help. Perhaps it needs to go beyond that into translating the reasons for reason into messages that meet the survival-oriented where they are. After all, to them, "I must survive" is likely to be one of the most rational of all statements.

The implication is that reason must abandon it's own confines and create paths to reason, rather than demanding that all come to it.

Dave - great job on illuminating the merits and limitations of reason!

Re your second paragraph - this is the basis of behavioral economics. We're not reasonable, yet claim we are, and can predictably act unreasonably while thinking it reasonable!

As you know, I've offered a new definition of adulthood - reasonhood, which talks about extending the scope of one's inquiry beyond the objective world and into the subjective realm of one's personal psychology. Doing so produces the holism and linear uncertainty required for quantum thinking, existential inquiry, creativity, etc.

I firmly believe a healthy course of reason, ala chemotherapy, would do most of us good, rooting out broken ideas, false self-image, emotional trauma, etc. We'd be a lot less certain, much more self-aware, creative, expressed, grateful and fulfilled. Reason clears the clutter and let's more interesting things flourish.

Reason and human sides made me think in flashes of:
The brass rather than the golden rule.
Good Enough Practices not Best Practices
Do what you can, where you are, with what you have.
With different times, experiences, languages etc. it is amazing we can communicate and 'reason' one to another at all.