Transition from the street 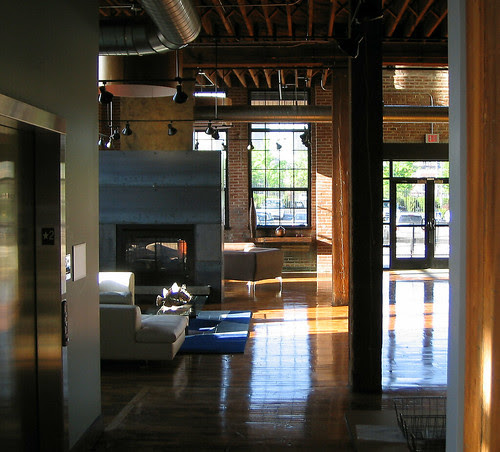 Transition from the street, originally uploaded by dgray_xplane.

The experience of entering a building influences the way you feel inside the building. If the transition is too abrupt there is no feeling of arrival, and the inside of the building fails to be a sanctum.

Evidence comes from the report by Robert Weiss and Serge Bouterline, Fairs, Exhibits, Pavilions, and their Audiences,Cambridge, Mass., 1962. The authors noticed that many exhibits failed to "hold" people; people drifted in and then drifted out again within a very short time. However, in one exhibit people had to cross a huge, deep-pile, bright orange carpet on the way in. In this case, though the exhibit was no better than other exhibits, people stayed. The authors concluded that people were, in general, under the influence of their own "street and crowd behavior," and that while under this influence could not relax enough to make contact with the exhibits. But the bright carpet presented them with such a strong contrast as they walked in, that it broke the effect of their outside behavior, in effect "wiped them clean," with the result that they could then get absorbed in the exhibit.

This image is from the lobby of XPLANE's new St. Louis office.

Wow, those are pretty swank digs. Where are they at?

And how soon can I con my way into a tour?

BTW, I disagree with the "transitional space" a bit. I think it's more a case of defining a territory by how hard it is to enter and leave it. If the escape route from a new environment is confined and lengthy, you are more subdued and act more like a guest, because the controller of the territory has power over you. If a new environment has poorly defined borders and easy escape routes, the owner has much less power over you, and your instincts do not dampen your behavior as much.

I've read reports on this with gated communities. Even if the gate has no guard and can't close, crime is much lower and non-residents are much less likely to enter, because the single point of exit creates a powerful psychological effect that makes strangers uneasy and threatened when inside.

I think we are planning an open house -- I will certainly post an invitation when we do. I certainly hope our new office doesn't make people feel uneasy or threatened!

Dave, this is a beautiful space! I love it. For ten years of my career as an Org Development professional, I worked for an Architecture and Engineering firm...and really came to appreciate visual communication, and design.

You might enjoy a wonderful book by Stewart Brand called How Buildings Learn. Definitely one to have in your library...

As for uneasy and threatened...most galleries have only one entrance (the Center for Creative Photograph is here in Tucson) and I enjoy going deep into that space and spending time...different strokes...

Don't read too much into the words "uneasy" or "threatened."

What I'm saying is I think it's more of a subconscious thing. If you are in a well-defined, hard to escape from place, your instincts tell you to be on good behavior, because it belongs to someone else.