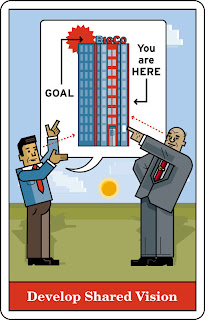 I also like that it seems likely there won't be a single language, exactly. A 'bazaar' model for visual language, instead of a 'cathedral' model, as I've heard others describe it. Each person will have his/her own variation of a visual vocabulary and even syntax. So we'll all constantly be exposed to and learning new ways of presenting meaning.
Related, Demos, a UK think tank whose blogs I follow, recently presented a paper on the development of English, advocating the cultivation of English not as a well defined cathedral, but as a bazaar of evolving cultural variations. Adding graphical communication will make the Bazaar even more bizarre. :)