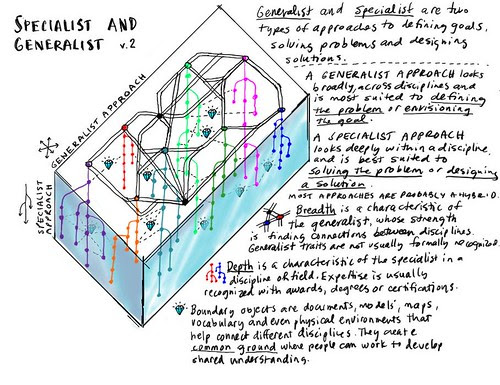 This is an update to a previous diagram, based on numerous comments and feedback.

You are cooking with oil. Or Kerosene. Or some other kind of flammable liquid. I like his update a lot because it acknowledges the flexibility that can exist between the differences. I also like the addition of "boundary Objects" (I call these artifacts) and the ephasis of their importance in helping to establish common ground.

I'm picking up on subtle terms that I think helps as well. Like saying "designing the solution" vs. executing. That creates a little leeway as the design process includes both thinking and execution.

I think it's awesome that you took a second stab at this. It was very much worth it.

What is crucial in the diagram, related with the previous diagram is that connections or junctions that can produce the depth, are not only the discrete signals that shall identify the new territory, but the theory of understanding how the whole is related with the part. So the difference between specialists and generalists is requested on the appropriate sample you receive to study what the cube is all about!

Dave,
Interesting update. You certainly incorporated a number of the feedback points, which offer some theoretical improvement to a certain degree. The extra visual noise created by the branching colored elements is a bit distracting compared to the elegance and clarity of the original. However, I'm sure the next iteration will resolve that.

Your earlier diagram helped me see my own "problem" from a new perspective and this diagram has opened another.

I like that you used crystals to symbolize "boundary objects." For me, the specialist-generalist distinction is about vision: concentrated vs. diffuse. The relationship between disciplines isn't so much a form of opaque separation as it is diffraction: "the bending of light as it passes from one medium to another."

I agree with Μενελαος that the deeper "connections or junctions" are an improvement here.

Something that isn't quite clear to me is what represents an actual generalist or specialist in the diagram, or whether it is about things they have and/or do. I'm having trouble equating the visual elements with some-real-thing.

David: Thanks. I'm glad you picked up on the change from "executing" to "designing."

Brian: Based on some of the feedback from the last diagram, I decided to do away with the idea that one is a specialist or generalist -- in fact one can be a specialist in some cases and a generalist in others. Most people are generalists in most things, and specialists in a few things.

So I thought it was less divisive to focus on the approach, rather than forcing people to identify as one or the other.

Sorry, I meant to say I like your refinements. Beyond that, I feel they introduce another range of insight, not a new problem. I like that there are more relations beneath the surface, creating a more integrated "whole."

... and I failed to recognize how much more prominent the notion of "approach" is in this version -- one of the "subtle terms," as David said.
PS. Thanks for posting a link to my earlier comments.

Great visuals, Dave, and some very sharp comments here too. For those of you interested in this subject, you may wish to check out the "eclectic curiosity" interview series, blog posts, and ChangeThis manifesto ("How Broad Thinking Leads to Big Ideas") at Creative Generalist. Cheers!