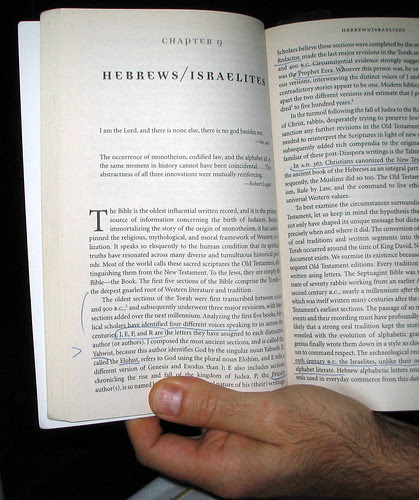 I'll be speaking at the upcoming O'Reilly Tools of Change for Publishing conference in New York, which runs from February 9-11. I'm speaking on a panel called Building a Better Web-Based Book.

The reason I was asked to join the panel was partly because of my thoughts and experiments with the unbook. So I have three questions for you:
1) Do you have any thoughts on how we can build a better web-based book? Or thoughts about the future of the book as we enter an age that's more and more digital and distributed?
2) Is anyone else out there experimenting with ideas about delivering book content, whether it's a mix of paper and electronic media or something else?
3) Is anyone specifically doing an unbook, or an unbook-related project? I'm asking because I want to start an online list that links to all the known unbooks out there.
And I also have a suggestion: If you're interested in the future of the book, or the future of paper, you might want to join me and a few others in Albany NY the weekend before the conference at Papercamp, where we'll be exploring exactly ideas in a very open forum. Papercamp was started by Matt Jones, who has already run one in the UK. You can read a great writeup about that one here (This one's probably going to be smaller).
So I suppose I have a fourth question: Are you coming to Papercamp NY?
As always, please share your thoughts!
(Image above is a photo of Jerry Michalski demonstrating his note-taking methods)

Dave, great that you are giving the Book2.0. movement or unbook movement this fabulous momentum. You’re really at the forefront of this. Let me reply to your post (sorry, I’m not sure if I fit in question 1, 2, or 3)…

As you know, I’m writing and experimenting with my own book on business model innovation. It’s so exciting to see how this works. We have over 200 people from 28 different countries that joined the book project. Each of them paid 24.- USD and more to be part of the journey!

With my team we call it, provocatively, the future of management books. Here is what we are doing:

a) We launched a platform to collaboratively write the book on business model innovation. My co-author and I are taking a relatively strong lead by writing prototype book chunks that we pitch to the members of the platform. Based on the resulting discussions we rework the book chunks and pitch them again in an iterative cycle.


b) As I mentioned, access to this platform is not free. People pay to be part of this book writing. In return they will have their name in the book and get a free pdf. After 2 months we had over 200 people and as a result we had to raise the price.

c) Another particularity of this book is that it will be very visual. Images and design is very important to convey our content. This is one of the reasons we need to write the book collaboratively. We need to test if the ideas we designed into the book work for the readers…

d) As a result of all of the above the platform’s center is becoming more and more the exchange of knowledge and experience of practitioners, rather than “just” a platform to write a book.

e) The book will still appear in physical print. However, it will connect back to the online platform as a place of exchange of knowledge and experience.

Sorry if this was a bit long, but it’s so exciting to talk about new book writing platform…