After we've mapped everything, what's next? 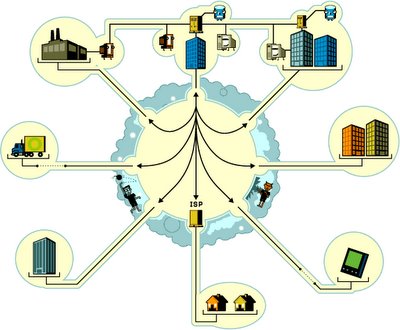 When you've followed the thread of empirical science to it's logical ends -- when you've split the atom; when you've mapped the human genome, when you've discovered every land mass and every species and mapped the periodic table -- what's next?

We are getting closer and closer; we have deconstructed everything to the tiniest fragments, and yet it feels like we are no closer to the truth. Where is the next frontier?

The science of networks is the science of the future. It's the science of in-betweens, of connections, of dynamic ecosystems. It's inherent in the problems of turbulence, weather and heart attacks, of viruses, and nearly everything else that continues to elude us.

ARE YOU ON THE WEB?

Recently I've been reading a book called Linked: How everything is connected to everything else and what it means, by Albert-Laszlo Barabasi.

Barabasi says that -- scientifically speaking --everything we thought we knew about networks is wrong.

How do we know? The internet is the first real man-made network that functions like an organic one. It's possible to study it because every aspect of it can be quantified and measured, and all its functions are known.

Exploration and analysis of the Internet has overturned many network theories of which, admittedly, I knew nothing. I won't go into them in detail here, but I highly recommend you buy the book. Barabasi's writing style is highly entertaining and readable, and the story fascinating.

The book ranges from six degrees of separation to Hollywood to cellular dynamics and why we haven't cured cancer yet. It talks about the long tail, the 80/20 rule, social networking and many other topics of interest to the Web 2.0 crowd.

One of the most interesting things to me is how wrong we were, and how little the subject had actually been explored until recently.

Which brings me to a fascinating opportunity called MeshForum, an upcoming three-day event in San Francisco (May 7th, 8th and 9th) that will bring together experts in all disciplines for an in-depth and wide-ranging conversation on networks: what they mean to us, what they can do for us, and their promise for the future.

And if that isn't enough, Robert Scoble will be there to talk about blogging and how he became the hub of everything. So please, get yourself over to the MeshForum website and take a look.

Jonathan Schwartz, the new CEO of Sun, says the network is the computer, so this plays into the thought of reconsidering how we use our devices. You might also like what Dr. Julian Bleecker is doing over at Techkowndo. It deals with the "where" of it all.

And after mapping comes meaning-making. Once we see the map, that can be the setting for our stories, *or* it can be an understanding of how things came to be (like the land bridge from Russia).

Glad you're digging that book. I enjoyed it immensely.

Thanks for Communication Nation-some great insights.

For a great (free) read on Networks check out "The Wealth of Networks : How Social Production Transforms Markets and Freedom" by Yochai Benkler. Yochai Benkler is (if my memory serves me correctly) a law professor at Yale.
This is a PDF version of the book that is not yet available for sale.
http://www.benkler.org/wealth_of_networks/index.php/Download_PDFs_of_the_book

You can also participate in a wiki about the book:
http://www.benkler.org/wealth_of_networks/index.php/Main_Page

Sheesh, so many links & so little time 4 all of it. Yup, life imitates ART 4 sure!

BTW, my regards to St. Louis. Spent some time there in my ole corporate days. ; o

I too thought the Barabasi book was excellent. I would recommend you take a look at Nexus: Small Worlds and the Groundbreaking Theory of Networks by Mark Buchanan. The Barabasi book makes you feel that he invented the whole area. Buchanans book is equally accessible but takes a broader look at the area and puts Barabasi's work in its rightful place.

Thanks for some great reading suggestions! My pile of books grows ever larger :)

How to create a draw my own network in work?

is any appication or draw in gimp or photoshop?