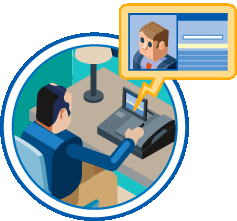 More and more people in the "real world" have been asking me about blogging. "What's the big deal?" they say. I talk to them about how conversations are unfolding online. "So what?" they reply. After awhile, I realized that the best way to explain blogging is to talk about the horizontal city.

The horizontal city is an idea based on some of Tom Friedman's ideas, presented in The World is Flat. I tell people that the internet is like a city that slices through the world horizontally. Anyone with internet access can visit the horizontal city -- and every time you visit a website or go online you are visiting.

But if you don't have a blog or some similar internet presence you are a tourist -- you don't live there and you don't enjoy the same benefits as the people who do. As far as the citizens of the horizontal city are concerned, you're invisible.

When you set up a blog, you are moving into the horizontal city. You are putting yourself -- your passions, your ideas, your beliefs -- online, and by doing so you make yourself linkable. People can see you. They can point to you. They can talk to you. You're a citizen.

At first it's just like moving into a new city in the real world. It's lonely. You don't know anyone. Nobody talks to you. But after awhile -- just like in a real-world city -- you start meeting people and having conversations. You leave a comment on someone's blog, or you link to one of their posts. Then they come to your blog to see who you are. The momentum builds and before you know it you are a member of a community -- maybe several communities.

It's like moving to a city in other ways, too. Putting yourself online is not without risk. You're more vulnerable -- to criminals, stalkers and the merely boring. But it's no different than a real city: you take on more risk but you also enter a thriving metropolis, bursting with opportunity and ideas.

Sometimes people say, "So what? I already live in a city. What's so great about the horizontal city?"

My reply is this: As Dave Weinberger has pointed out, the web runs on our collective passion. When you put yourself online and make yourself linkable you are making your passions explicit, linkable and clickable. Because of this, the people who find you and point to you tend to share your passions.

On the web, your "hit rate" of interesting people is much, much higher than it is in the real world. How often in the real world do you meet people who truly fascinate you? If it's more than 10 percent of the people you meet, I'd say you are very lucky.

But on the web, your "hit rate" is much higher. I have been blogging only a year, and already, quite a few people whom I have met online have become offline (real-world) friends. And almost without exception, they are fascinating, passionate people who are fun to talk to and energizing to spend time with.

And that (I say to my non-blogging friends) is why blogging is a big deal.

Great post. I think my wife is starting to get this vision herself. She often reminds me about the blog.

I think your theory applies not only to the "hit rate" of interesting people, but to the other extreme as well. In my experience the "hit rate" of spammers online is also significantly higher than it is in day-to-day life... (Not so many people offer me shady stock deals or personal enhancement devices in person.) Perhaps the web acts as an amplifier?

I think it's also amazing now how there are lasting conversations or interactions now. Previously you had to actively engage with a specific person to initiate a conversation now, with something like a blog each post becomes an implicit invitation to converse on your chosen topic and people can enter and leave the conversation at will without restriction on time or place.

This is probably the best description I have read about blogging, Dave. Do I have your permission to translate it to Spanish and post the article in Baquía.com?