Toward a theory of information relativity 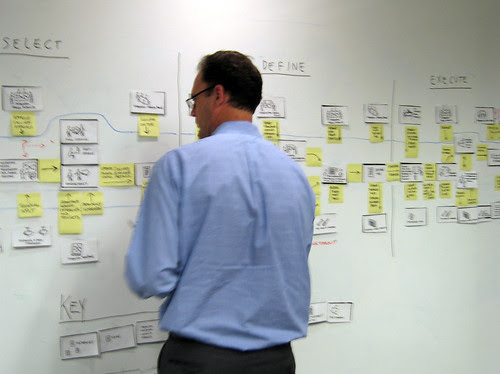 People often ask me how to visualize information. They ask things like “How can I visualize my industry ecosystem?” or “How can I visualize how my product works.” My first instinct is to try and back them up a bit. This is because they are already defining their project in terms of an answer or solution, and before you can deliver an answer you need to know the question. Getting the question right is the most important component in information design, and it’s the most common point where information design goes wrong.

This is because information is always relative. Always. Before you can undertake any kind of visualization exercise, you need to know what question you want to answer, and for whom. A look at the history of information will confirm this point.

Science is a process by which we attempt to compare our perceptions with something we call “reality” but in fact reality is something we can never really know for sure. Like the flickering shadows on the wall of Plato’s cave, reality is something we can only see dimly, because it’s distorted by our perceptions and beliefs. Every observation and fact has a margin of error, which is directly related to the observer’s background, beliefs, culture and limitations. It is written in the Talmud, “We see things not as they are, but as we are.”1

By beginning with an audience and a question you give yourself a focusing device. Like a flashlight, the audience and question will illuminate the information that’s relevant to your goal, while leaving the rest in the dark. Good information design is as much about what you leave out as what you put in.

What to put in: Information that’s relevant to your target audience, and that answers a real question that they have. What to leave out: Everything else. The best rule of thumb is “When in doubt, leave it out.”

So if you want to create a visual in order to explain something, ask yourself the following questions first:

At XPLANE we call this the WHODO, and it’s a required input to any project we undertake. Once you understand the WHO (your audience) you will have a sense of their level of existing knowledge of the subject.

Explaining the same information to a group of executives, or salespeople, would be a completely different exercise. You can expect that they will have a different set of questions and probably will be more focused on practical applications and will get impatient with scientific or technical explanations.

Thus, the same information will need to be presented very differently based on the audience that you are talking to.

Understanding the audience is only part of the equation. The other half of the WHODO is DO. Before you can undertake any explanatory task you need to know what outcome you expect. Describing this as a change in understanding is not enough. Understanding is difficult to observe. People often will say they understand something just to get you out of their hair.

People will also believe that they understand something when they don’t really understand it. Have you ever left a meeting where everyone seemed to be in agreement, yet their later actions made it clear that they didn’t agree after all? It’s common to see nodding heads in a room when people don’t agree – they think they agree but in reality they don’t. This is because when an explanation is sufficiently vague, people are free to believe what they want to believe. Politicians often use this rhetorical principle to great effect. Words like “freedom, justice and fairness” mean different things to different people. Vague explanations are common in business, and they can give the illusion of agreement. But they don’t get results.

Here’s the key: When people understand things differently, they do things differently. What they say is less revelatory than what they do. So if you want to build a rock-solid explanation, focus on what you want people to do. If they understand what you are saying, what changes in behavior would you expect to see?

Once you have defined your WHODO, next you need to anticipate the questions they will ask. This again will depend on your audience and the information they will need to make a decision. Part of this is also cultural. Scientists will want to see scientific evidence. They will want technical explanations and probably a lot of detailed analysis. Busy executives may want different kinds of proof, such as what customers are buying and what competitors are doing. They will also be less generous with their time and expect you to get quickly to the point.

But you don’t have to go in cold. If you understand the mind of your audience, you will be able to generate a list of questions that they are likely to ask.

Once you have defined your WHODO and generated a list of questions, you can start thinking about how to visualize the information. Will they need a broad overview or detailed charts and specifications? Will they need to see the value to the customer, or the technical operational details?

In the fields of information science and knowledge management there is a model known as the Data Information Knowledge Wisdom Hierarchy, or DIKW for short. This has become a standard for defining the terms and how they relate to each other.2 Here’s how defines the hierarchy:

Data has no particular significance beyond representation. It consists of symbols that stand for objects, events or their properties. Data is a collection of facts3 – also called “know-nothing”4 to reinforce the point that data, by itself is dumb; it has no meaning.

Information is data that has been organized so that it is useful, usually because of relational connections – also called “know-what.” Information answers questions like who, what, where, when and how many.

Knowledge is information that has been integrated into the mind, memory and body, such that it can be applied to doing and making things, also called “know-how.” Knowledge is usually acquired through experience, or through stories about other people’s experiences.

So I propose the beginnings of a theory of information relativity:

2. The value of information is always relative because it is directly related to it’s usefulness, which depends on the user, the context and the situation.

At its heart, information design is about change. It’s about increasing the amount of useful information in the world. Good information design should result in changes to understanding – increases in knowledge and wisdom – which can be directly measured by observable changes in human behavior.

2. Harlan Cleveland first wrote about the DIKW hierarchy in a December, 1982 article “Information as Resource” in The Futurist, citing inspiration from the following lines written by T.S. Eliot:

3. Even the things we think of as facts are relative to the observer and a particular point of view. The problem of facts is as old as science itself and is still unresolved. See “Free the Facts” by Dave Gray, 2009.

This directly reflects the challenges that I face on a daily basis. I've run into each of these conceptual issues over and over. However, I believe that the fundamental basis of my difficulties is "WHO". I'm continuously redefining the audience that I want to talk to.

Historically, I've approached my art from the martial perspective, and yet I realize that my best chance for real success is through it's health benefits. I realize that the two are intrinsically tied together, yet it's the idea of presentation that ties me up in knots.

Bravo! Thank you for such a lovely essay. Your thoughts toward a theory of information relativity help me play through a variety of viz/verb/verve communication challenges.

You can look a learning through precisely the same lens:

"So I propose the beginnings of a theory of learning relativity:

2. The value of learning is always relative because it is directly related to it’s usefulness, which depends on the user, the context and the situation.

At its heart, learning design is about change. It’s about increasing the amount of useful learning in the world. Good learning design should result in changes to understanding – increases in knowledge and wisdom – which can be directly measured by observable changes in human behavior."

In this model, is there such a thing as "an inconvenient truth"? How does that play out?

In other words, should I pay attention to an "inconvenient truth" (i.e., a "so-called fact" that isn't in my interest) if it doesn't work for me (i.e., isn't of practical use).

I ask these questions because I wonder whether this logic doesn't get us, as a society, into trouble from time to time.

Good Stuff! I suspect that many people (like myself) will get more out of the "how to" part than the "theory" part - initially. Both are important. Triggered a memory of New Media Theory Primer a handout my friend Jeff Bardzel gives to his university students. My notes here.

Thanks for all the comments!

LeRoy: Yes. The audience can be tough to define and sometimes can seem to constantly shift.

Honoria: Would love to hear about some of those challenges and how you tackled them.

Peter: I love the concept of an inconvenient truth. Reminds me of the following quote by Upton Sinclair: "It is difficult to get a man to understand something when his job depends on not understanding it."

Troy: Love the image and look forward to reading that paper.

The hardest part about presenting (and coaching others to present) these days is that the WHO is rarely homogeneous. In today's workplace you're often presenting to both technical experts (engineers, scientists, programmers, etc.) and business people (executives, sales reps, marketing gurus, bean counters, etc.) at the same time. What's your advice then?

In the case where I had a mix of technical and business types I would start the meeting with the executive overview and then dive down to the more technical aspects.

The tech types will benefit from the overview and if you have a short break before you dive deeper the executives will have an opportunity to politely excuse themselves.

You will note that in these kinds of meetings the execs often will sit near the door for exactly that reason anyway, so you might as well be explicit and offer them a chance to leave gracefully.

I liked the phrase “sufficiently vague explanation” by meaning and form. It is true that the presenter has to formulate unambiguous and straight ideas to be understood as indented. Plain and clear explanations will result in expected reaction.

The greatest determinate of the value of information is certainty or accuracy, often coupled with timeliness and exclusivity. Check out Shapiro and Varian's Information Rules (HBS Press 1999)

Information Rules -- I know that book very well. Should be required reading for knowledge workers.

“Creativity is an advertising agency's most valuable asset, because it is the rarest.”