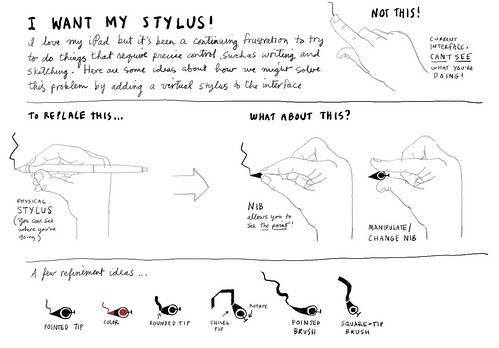 I love my iPad, but the finger-only interface has been a continuing frustration for me. As an artist and designer, I want to do things that I can easily do with a pen and paper, like write, scribble and sketch. But these are not things we typically do with our fingers, any more than we eat soup or salad with our fingers.

Apple apologists will say that you can sketch and write with the iPad, and indeed we can. Yes, and indeed we can also eat salad or even soup without utensils if it's absolutely necessary. But that's not ideal, is it? Over the years we've developed tools, like forks, spoons, knives and yes, pens, that make life easier. We should expect no less from our interface designers.

This morning I participated in a stimulating discussion on twitter with user experience designers @docbaty, @daveixd, @mojoguzzi and @fred_beecher that left me thinking -- could we solve this problem without changing the hardware? And indeed I think we can.

The problem that a pen solves (beyond carrying ink around) is that it gives the user the ability to "see where they are going." Using your finger to draw on the iPad, or even one of the many styli that are available, has the tendency to hide the point of the virtual "pen," thus hiding the path.

Now imagine an interface that allows you to use the natural gesture you use to write with a pen or pencil, and gives you a point that you can see. Suddenly you can see where you are going and the primary problem is solved.

One of the things that occurred to me this morning -- which led to this insight -- was that when Apple first "virtualized" the keyboard by adding it to the software interface instead of the hardware, there was a lot of initial resistance. I was one of those resisters. I couldn't imagine using a phone without a physical keyboard. But over time, I learned to use the virtual keyboard and now I appreciate the additional flexibility that this interface gives me: to have more screen or less as the case demands.

Why not do the same with the stylus? A "virtualized pen" would answer most of my gripes and over time I would probably come to love it. I might even stop carrying a pen and paper around. And that would be an interface I could fall in love with.

With this virtual pen I would consider the Ipad. (Apple's 'superclosed source strategy' makes me hesitate though). For now I'll stick to my ModBook WITH a pen.

Hi Dave, Did you consider the Pogo Sketch and Pogo Stylus? Both seem to offer the solution you are suggesting and I am interested in your thoughts of where they might fall short.

Sorry Dave, I am sitting at a regional airport waiting for a late plane, so this turned out a bit longer than expected...

I'd like to propose an alternative: the "nail cursor" (this is the first place I have published it). This involves the convergence of 'the proliferation of nail art boutiques in shopping centres and on the high street' and 'the touch screen technology with which we have all become familiar'. The nail artist paints a mouse pointer on my nail, terminating at the nail tip. Apple creates 'training software' that learns to anticipate where my nail would be in 2 d space x mm above and to the left of where the pad of my finger hits the screen (switch 'left' for 'right' for the left-hander). Voila!

I can glimpse the breadth of the market already. Nail shaping to a point, with or without nail polish of the image of a cursor. A small dot in place of the mouse pointer image for people who do not want to look too geeky. Or at the other end of the scale, full hand tattoo with sub-nail tattooing for the uber-geek s&m hard-core Apple user. Glow in the dark dot for surruptitious computing under the blankets (so much easier with iPad than 17" notebook, let alone getting the desktop under there). Multiple nails done for multi-touch draw software (yet to be developed). Franchised Disney characters, such as a miniture Mickey or Mini pointing with finger or even tail.

(Scott, the problem is that the stylus does not come to a pen- or pencil-like point.)

it doesn't have to be a stylus of course...

I've used the Dagi stylus - versus the pogo - because you can see where the "point" is. however, its flat surface is a pain to work with and I'm always fearful of breaking the plastic "point" - there's also no easy way to carry a stylus (unlike the ModBook's pen holder.
I like your concept, but they'll have to get over the multi-touch issue (you can't even draw with a stylus with you hand on the iPad -- unless you use a glove). I've been extremely disappointed with the iPad and it's sketching -- I'm so wanting a ModBook (Pro) ... but the price is a killer. Using my cintiq is the best (non-portable alternative) for now.

The technology will be here in a few years. Hitachi already has a prototype of a capacitive touch screen that's capable of accepting a stylus. In the video, the response rate seems a little lagged. To replace the pen and paper experience, the response rate will need to be nearly real time.

In regards to the Pogo stylus, I found it to be better than a finger but much worse than a pen. There's no precision.

Dave.. This is is very interessant. I arrived at a similar idea just today and got to this Blog via a search for "virtual pen for iPad". I am surprised that this has not been developed yet.

I saw there are more comments on your drawing on Flickr. So I am off to read those. Will search further to see if anyone has implemented this yet.

Great thinking.. Also I am admirer of your work at xplain

Dave,
I agree with your comments concerning the difficulty in using such touch appliances as iPhones, iPods and iPads. When I first used my iPhone 4s I struggled to type off the virtual keyboard and sketch on such apps as draw something. My advice is that if you persist with using your finger as the stylus, you will soon become better at it and get used to it. As now it is 2012 and the iPad has been around for 2 years, it has upgraded to an iPad 3 and there are many different styluses to use for the iPad (buymac.com). The link following the comment will lead you to a site where you are able to buy the different types of styluses for the iPad.
Technology is moving so fast and it is very tough to keep up, other links in this website show videos of people using the iPad as an canvas to paint on which I’d guess you would also be interested is as you said you are an artist and designer, things like this would be perfect for you. Not only do they make styluses now but the length into what they have done to make the most incredible thing, for example electronic paint brushes and pens of various sizes and shapes. These allow you to draw, write, sketch and paint on the iPad with absolute detail.
Indeed life would be much easier with such utensils as spoons and forks, but back when apple first released the iPad I bet they had no intentions of using it as a canvas for artists as you. Apples intention was to create a device that was crossed between an iPhone and a Mac book.
Even the schooling these days are using all these touch devices, for example iPads, smart boards, digital projectors and high tech computers. Not only do the teachers use these devices to teach the students but a means of communication.(Manuguerra 2011)