Bitching about work means you like it the way it is 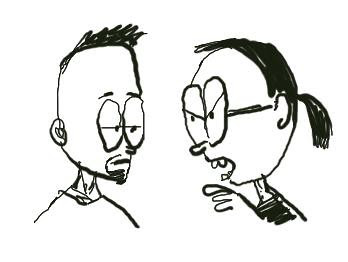 Bitching about work means you like it the way it is, originally uploaded by dgray_xplane.

It sounds counterintuitive, but when you bitch about work you are only feeding the problems you talk about.

Bitching about work is like scratching an itch -- it may make you feel better in the short run, but in the long term you are only making it worse.

When you bitch about work you keep your issues and concerns in the dark, as far as your organization is concerned. You also feed negative feelings, divisiveness and cliquishness in your workplace, which makes the office unpleasant and generally brings everybody down.

By raising your issues appropriately, in a public forum, you bring them to light, which allows them to be discussed and addressed. Even if you don't agree with the outcome, at least you have been heard and your opinion is known.

There are two ways to solve a work situation you don't like: Change the situation or find another job. By bitching in private you're not doing anything to change the situation, and in addition you're making the workplace less fun for everybody.

By making your concerns public you have a chance to address them, and even if you don't get what you want, you can make the decision to live with it or move to another job.

The third alternative, staying in a job you hate, is like staying in an abusive relationship. It only reinforces negative behavior all around.

So next time you have the urge to scratch that itch, don't tell yourself it's okay because you're "only venting." Ask yourself if it's worth the damage you'll cause.

Dave, well said and I couldn't agree more. I have learned slowly but surely how much power verbalizing something has. Negatively AND positively. You are such a wise turtle.

This is so true; like the well-known quote attributed to St. Francis: Lord grant me the serenity to accept the things I cannot change, the courage to change the things I can, and the wisdom to know the difference.

But I must disagree and say that venting does absolutely have its place, esp. among co-workers. When its truly impossible to change a process or a person but it or he or she makes your day difficult, there is much to be gained from commiseration, if only to know that it's not just you having the trouble. Maybe that can lead to change? Or at least provide an outlet for the frustration that so often precedes the acceptance step of the maxim above.

This is a fantastic post - and very appropriate for creative work places where passions tend to run high. It brings to mind passiveaggressivenotes.com. Why leave a note, when you could actually sit down with someone, discuss the issue, and work towards a resolution?

Very interesting. I would love to read a post on how the "bitchers" can positively make the changes they're unhappy with throughout the organization.

Mind you, a book should not be discarded just because it's poorly written.

There's a difference between bitching and just plain not being able to communicate your point of view effectively.

Sometimes even bitches say something valuable.

Sunni, Great point. You can start virtuous cycles as easily as vicious cycles. Both kinds, once initiated, are self-reinforcing -- easier to maintain and accelerate as time goes on.

Meg, I hope there's a way to share your feelings and empathize without whining or complaining about other people. Yes there is such a thing as an asshole boss, and when you have one, stay in your job and bitch about it, you complete the co-dependency loop. I can't see that as positive for the psyche.

Anonymous, Great journeys start with small steps. The first step is signing your name to blog comments. Who knows what might be possible after that?

Eric, I completely agree. I'm referring here to people who are doing it consciously. People can definitely say the right thing in the wrong way (and vice versa).

I'm sure there is a real situation behind this post, and in that context it might be reasonable, I don't know. But here is an alternative perspective:

In my experience, the reason people vent is because they feel powerless to voice their concerns. Bitching in private at least provides a modicum of sympathy and humanity for a frustrated employee.

The public forum that's suggested here is precisely where those concerns are most effectively neutralized. Under the watchful eye of your superiors and peers, you qualify and hedge and censor your opinions; you focus on objective facts and avoid mention of the human, under pressure to maintain your coworkers' image of you.

It's completely unsurprising that management, who are usually committed to maintaining the status quo, would suggest a playing field so tilted against the employee. It provides the appearance of a good faith effort to deal with issues while secretly undermining it. Under these conditions, isn't an employee justified in doing what they can to maintain their sanity?

My advice is to employees is: don't fall for this charade. Trust your instincts that this isn't the right company for you and put on the positive mask that is expected of you until you can move on. If the tacit message is that your insight & contributions aren't wanted, then offer them to a competitor instead.

I agree that venting is very healthy and that in organizations it can't go underground and works best if you talk about problems. However, just bitching in the open about something is a waste of time for everyone involved, unless, you also provide possible solutions to the problem and are open to a true dialogue regarding the problems.
Most people just want to bitch, whether it's up front or behind the scenes.

Dave, my previous anonymous comment seems to have failed to clear the moderation hurdle, which is unfortunate because I would have loved to hear your response.

Today I ran across this article in Business Week again: The Old Solutions Have Become the New Problems, which I think is highly relevant to this issue. Could it be that unhappy employees are a great resource? Something to consider.

I pretty much agree with all of these thoughts.

Mike, for some reason Blogger doesn't notify me when there are new comments and I don't check every day so sometimes it takes a little while for me to get to the moderation -- but I try to air every thought I get.

Yeah, I know that bitching and gossip are like weeds -- they sprout up everywhere and they are not going away.

I suppose my primary message here is to think twice before you bitch, because it does cause damage and it's not harmless.

And I agree, Mike, there are plenty of good jobs out there, and life is too short to stay in a job you hate.

Dave, I agree with what you have to say about bitching @ work..I have actually learnt it the hardway..

Its a sort of situation where you can't afford to stay in the grey area...a choice has to be made about staying with the current job with a positive mindset or changing the job ..

Dave that was so rigth... Actually when I was working on a communication company, were creativity aspects matters a lot, my opinion and ideas were quite different to the ones of my boss. There was the problem, I was suposed to create and make shape about something I totally dislike... and It was no other way: do it or do it... at the time I was doing the work I though: ok, my personal fingerprints will be anyway all over the work, I accepted it. So maybe just have the courage to face the situation and defending those fingerprint at my best, and then I made the difference between bitching about work wich wanst totally unproductive, and just communicate the work like I was suposed to do, but keeping wisely my fingerprints.

So that was my situation! congratulations about the blog!

Life is too short to stay in a job you hate. There is always a reason to keep the job- you need money, you need to beef up your resume, you are scared you won't get another one, etc.

I just gave my boss my 2 week notice because I am miserable every morning when I have to go to work. Daily life shouldn't be like that.

I wrote a blog about this topic as well and also used the metaphor of an abusive relationship. It is common sense when it comes to your spouse being abusive, but not your job being abusive. It should be tho!

Just seat down and speak out your thoughts.... maybe then communication takes place, and your inside voice can be silenced while a feedback comes in...
Bitching... can be a way to communicate?

Sure, bitching can be a way to communicate. But if it's productive I don't call it bitching, I call it feedback.

Punching, hitting and spitting are all ways to communicate too -- but not necessarily productive.

I found your article interesting, but it stopped short of helping the "aggrieved" person deal with the difficult person in question--assuming the subject wants to remain at his/her current job. Sometimes positive scripting will help people enunciate their needs in a manner that will get them them met. There is a way to deal with energy vampires. The blogs on www.powerdiversity.com have recently included scripting to help people deal with difficult coworkers. If you're not familiar with Dan O'Connor, you might check him out and evaluate the assistance he offers to anyone wishing to combat negativity in the workplace.
Mary Ellen Maruson, Sioux Falls, SD

I really did find this interesting. I find myself "bitching" about work almost on a daily basis. It varies about the people I work with, the people I interact with, or just the overall situation. Yet at the same time I found the solutions to this to be very true. At my job before this one I was unhappy and would complain to family and friends about being unhappy but I kept up with working there. After being there for over two years the level of unhappiness got to be too much and I found something new. In my current job I feel as though even though I complain quite a bit I am not truly unhappy enough to the point that I see myself quitting. I think overall it is one of the best experiences that I have been given. I have a lot of responsibities and am allowed to achieve success while perfoming those responsibities. I think that in general it's just the nature that everyone can find something to complain about, yet complaining means you like it the way it is because if you didn't you wouldn't still be there.