Will we ever replace paper? 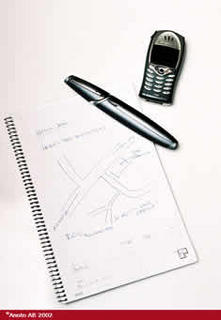 We're getting close, but no technology has succeeded in replacing paper yet. The promise of a paperless, digital workplace is great, but as the emerging back-to-paper movement suggests, there still seems to be a long way to go.

One of the things I have tried in the past is Anoto functionality, which combines pen and paper in a unique way. I first read about Anoto in the April 2001 issue of Wired magazine.

The story was about this hot new company that had invented a way for a pen to remember everything it wrote, and beam the information directly to a computer. It involved a tiny digital camera and hard disk in the pen, and a complex dot patterm, which was invisible to the naked eye and somehow never repeated itself exactly so the pen could always "know" where it was.

I didn't fully understand it, but I have been wanting something like this forever: a way that I could write on paper and synchronize the files with a computer or PDA, where they could be stored digitally.

The article was titled "The hot new medium: Paper", and at the time, I was convinced that it was an April fool's joke Wired was playing on all of us. I mean, the company was called "Anoto" and I was waiting for the "This was Anoto real story" joke.

Later that month though, a friend convinced me it was real and I looked up Anoto's website. Turns out it was a real company after all.

So I got online and bought the pen and some of the special paper. I had to buy it from a site in the UK because I couldn't find one in the States.

When I got the thing I tried it out and was amazed. It worked perfectly; better than I had anticipated. I could carry the pen around, write in the sketchbook any time I wanted, and when I got back to my laptop I could synchronize the drawings with my PC. I could even go back later and modify a drawing I had worked on two days earlier: the pen could always remember where I was.

I got a Nokia version of the pen, which was cool because I could use the same charger that I use with my phone. The pen synched with a "digital diary" on my computer. I could turn sketches into PowerPoint slides with the touch of a button.

I brought the digital pen and a digital sketchbook to an XPLANE training session and passed it around. Everyone took a turn.

I was very happy with the whole system but for some reason it didn't become a part of my daily routine. Why? I'm not sure exactly, but if I had to put my finger on it I would say it was the complexity of the entire system:
- You had to have special paper, and remember to bring it with you
- You had to have a special pen, and it was battery powered so there was always the potential for it to run out of juice
- Since it didn't fully replace my PC, it didn't actually lighten my burden when traveling
- In fact it increased my load, because I had to carry the PC, the pen, the special paper and the docking bay.

Now I'm moving on to my next great hope: the tablet PC. It's not quite the ultimate tool yet, but it's starting to get close.

If you want to try the digital pen/paper scenario, you can get everything you need at Datamind, the UK company where I got mine. As far as I know, they will ship it to you just about anywhere.

If you don't mind managing a number of moving parts it's a great system.

If you have had an experience with Anoto functionality -- positive or negative -- please leave a comment. I would love to hear about your experience.

Dave, I'm going to have to keep hounding you until you try Microsoft's OneNote. Not only does it work extremely well without a tablet and with, it gives you one HUGE advantage over paper: the ability to record your meetings along with your notes.

The amazing part is that when you later review your notes, just click on one particular section, press the play button, and the recording jumps to a few seconds before you wrote that particular note.

This lets you just take notes using minimal keywords, and lets you get your head out of your notebook and be more present.

Isn't that what communicating is all about?

Interesting post. And timely in my world. My boss just got his tablet PC today. He's a whore for tech toys and thinks this purchase will eliminate the need for the pads of paper we've been using for notes. I think maybe I will log his experience and see how long and if he can really avoid real paper now that he has his new toy.

Personally, though I've learned to read and write nearly everything into my Macs, I still need a pad of paper around when I am trying to think something tough out initially. Eventually it's turned into XHTML, PHP or a PSD file, but still I have to draw or write it out by hand first.

I am already on it Nick!

I have a tablet PC on order and I believe OneNote comes pre-installed.

I will let you know what I think after I have a chance to try it out.

Seeing as you've been posting about paper alot lately, I saw this post and instantly thought of you. Productivity-tools-are-killing-my-day - it made me laugh. :)