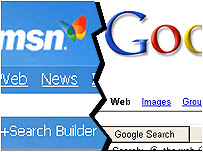 The main event this evening promises to be a battle royal: Microsoft vs. Google.
Dates are the dates of the blog entries, not necessarily events. What am I, your personal research assistant? And who cares about facts on Saturday night anyway? This is satire dammit!

Just trying to get you in the mood. Now let's rumble!

March 25, 1998: Microsoft patents ones and zeroes, creating a "lock" on the software industry.

May 3: Gates enters the fray, bringing "a ferocity that no one has seen since the Netscape war."

July 26: Microsoft and Google take to the skies in a battle for aerial supremacy.

August 25: Google Talk rips off the Microsoft butterfly. Zing! But Microsoft quickly responds by sending Scoble to Google to investigate.

Both companies have become entangled in lawsuits and... hold on, the crowd seems to be leaving. Wait, the fight isn't over!

Well, if you must leave, try a random snack on your way out. If it doesn't suit your taste just hit the refresh button to try another.

Maybe you're leaving because you're goingt to a party tonight? Before you go, you might want to review Thirty - Eight Ways to Win an Argument, by Schopenhauer (just in case). My favorite is number 5: "Use your opponent's beliefs against him." Sometimes you need to defend yourself in casual conversation. This tactical training could be especially valuable if you happen to work for Microsoft or Google.