Why you need to simplify your diagrams 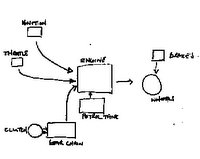 A 1997 study found that when people create visual diagrams, they use about 6 to 12 visual elements, or "nodes" to describe a system.

What's interesting to me is that this is true no matter what tools they used and regardless of the complexity of the system.

Tools didn't matter: Whether people made diagrams with paper cutouts, online diagramming tools or pencil and paper, the result was the same.

In fact the only thing that did seem to affect the number of nodes people used is when the experimenter instructed them to take as long as they needed and to make diagrams that were as detailed as possible. And even then the number of nodes maxed out at about 13.

This is worth thinking about if you are going to use diagrams to communicate with other people. What insights can we glean from this? Here are some of my thoughts:

2. Most mental models seem to be made up of 6-12 components

3. A diagram with more then 13 components will probably not become integrated into people's consciousness as a mental model

To me, that means that if you want your system to be understood and integrated into people's thinking as a mental model,

you had better boil it down to a simple picture.

The study -- Correction: A picture is worth 84.1 words -- was conducted by Cambridge researcher Alan F. Blackwell and funded by the Medical Research Council and Hitachi Europe Ltd. Update: Alan suggested I point out that he was a Ph.d. student at the time this study was conducted -- more recent research can be found on his website.

Hm, now I'm wondering about the connection between the number of graphic elements and the number in a group (your previous post!)

Interesting stuff! I had a read of the article and find it makes one glaring assumption: that I will map the system in order to teach it to you. Hrrmm... In thinking about how many "components" people can integrate at a time, I really wonder if my teaching a system to you is really the best process to get you to understand it. I'd be curious to see how this max number of 13 shifts (or not) when system mapping is done as a participative activity. Oh man, now I'm REALLY curious!! I'm going down this route thinking of how complex and elaborate of a system map I can draw on my own and more so, consistently re-draw it the same way over and over again. I think it's easy, because it's a representation of my own mental model. Therefore, it makes it tough to share that with another because it (potentially) requires the other to 1) be open to saying goodbye to their model, 2) seek to understand the paradigm I'm presenting, and 3) accept the new beginning with my model.

I think I'm getting a little off-topic here so I'll stop...

(I just LOVE your blog Dave! Make for a fabulous morning brain booster with my coffee! Thanks!!)

This is a great insight, particularly about separating inherent complexity of a topic with its visualization.

I beleive it has to do with the limitations of human working memory capacity. In 1956 George Miller showed in his research that there is a fundamental limitation for people's ability to handle information. People can sort things into seven categories or use a seven point rating scale, but anything more than seven "chunks" taxes our capacity and leads to errors in performance. In fact all the tasks we perform daily are constrained by this channel capacity of seven "chunks".
The only way to handle more information is to increase the amount of information in the "chunks", which happens when a person develops expertise in certain field.
I think people just map the "chunks" they have already in their memory on the paper. When people draw diagrams of systems of different complexity they still chunk the information in order to be able to handle it within the limitations of the working memory, but the amount of information packed in one chunk is bigger.

In harmony with these sentiments, the National Science Foundation recently announced Doodle Search software that uses practical pattern recognition technology to locate objects. The 3d search software engine, developed by Imaginestics of West Layfayette, Indiana, can be sampled at 3d-seek.com.

Is a picture really worth that many words (The Picture Problem, Gladwell)?

Also, a number of tools are designed to allow users to build and view complex models in which one only sees the immediate subset of the model or diagram at any given time, allowing the user to comprehend and author at that smaller, more comprehensible number of items in a diagram. Tinderbox allows users to put diagrams inside individual note items. ZigZag does the same by using the "dimension" idea to limit the number of items and links one can see at any given time. The view's contents and the level of detail can be switched by modifying the visible dimensions.

This idea of limiting context is a big focus of a recent post by m.c. schraefel of Southampton University: "Why Graphs Suck for Exploring RDF (ie The Semantic Web)"

Anonymous said...
This comment has been removed by a blog administrator.
1/19/2009