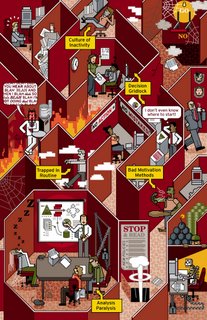 You're frustrated. Somebody, somewhere in your organization has done something that made you mad. They made extra work for you; or they didn't do something that they were supposed to do, or maybe they said something rude.

So here's the big question: What are you going to do about it?

Here are a few options:

a) Lash out. Express your anger directly at the person. Let them know exactly how you feel and don't pull any punches. Another version of this one is to secretly plot your revenge, which might be some clever yet cutting statement you launch at the next staff meeting.

b) Write a semi-polite, yet seething email that expresses your frustration, while following the behavioral norms of your company. Be sure to copy everybody and their mother so the whole world knows how you feel.

c) Vent. Grab your best friend from his/her desk and take them out of the office for a coffee or smoke break. Vent your frustrations -- but as far as everyone else is concerned you're still your naturally cheerful self. Keep that fake smile on at all costs!

e) Do nothing. Nothing, that is, except sit at your desk and stew.

Which option do you usually choose?

I can't tell you how much unnecessary pain, frustration and anxiety I have seen caused by these kinds of activities. They may make you feel better in the short term, but all of them are destructive behaviors that will hurt both you and your organization.

These kinds of activities are selfish. You express your frustration but do no good to yourself or anyone else. In addition, they are likely to unleash retaliatory behaviors from other parties, resulting in escalating tension and even more pain.

Lashing out puts other people on the defensive and raises their hackles. Whether they respond to your anger or not, they will resent your approach and you won't get anywhere productive. Plotting revenge is even worse, for obvious reasons.

The semi-polite yet seething email often seems to be the easiest way out -- you express your feelings in a semi-public way and make them known. But you are using the group as an authority figure or policeman -- it's like running crying to daddy. What happens is that you force the other person to respond in kind, because no response looks like an admission of guilt. The circle of pain begins again.

Venting seems like it would do no harm, but it does. You are tearing down the human bonds that make your work meaningful and productive. Teamwork and personal relationships are the human glue that holds organizations together. By venting -- even to your close friends -- you are weakening the foundations, just as surely as termites weaken the foundations of a building.

Going through the chain of command seems proper. But think about it. You are involving your boss in your problems -- don't you think your boss might have better things to do? In addition, you really aren't shielding yourself from anything -- it will probably be clear to the affected party where the complaint came from anyway. So now you have gotten someone in trouble, and possibly wasted your boss's time to boot. Do you think you're going to see better behavior and more teamwork from now on?

Doing nothing leaves you unhappy, and the situation remains unresolved.

So what do you do?

1. Take a minute. Cool down. Try to see how the affront could have been unintentional.

2. Pick up the phone, or walk over to the person's desk. If they're not there come back later. Whatever you do, don't send an email.

3. Tell them what you are concerned about. Don't assume or judge them! Most of the time people are not aware that they stepped over a line. If something really bothers you or is unacceptable, you can say this -- but say it in a calm tone of voice.

5. Listen. You're opening the door to a conversation. You will find that you are often surprised. Being open to the other point of view can enlighten your understanding of the situation and maybe even help you see a larger system dynamic.

All this is harder than it sounds, especially when someone has done something to tick you off. But with practice, you will get better and better at it. They key to success is to be genuine, to respect the other person and assume that their intentions are good. This creates a positive, constructive dynamic. Even a negative, cynical person will find it difficult to hang on to grudges and ill-will when you give them no place to land.

It's true that in some organizations direct behavior is rare -- even discouraged. If you are unfortunate enough to work in one of these companies, it's better to figure it out as fast as possible and get out of there!

Next time you run into conflict, go direct. It's the quickest and most reliable route to resolution.

I normally blog the incident.
Works wonderfully for me.

An excellent post which has certainly given me food for thought. I usually just sit there and stew but I'll really think about that now!

This is my life at work RIGHT NOW! And I've gone through all of these options in my mind over and over again, and of course I come to the same conclusions also. Your explanations of the first options and their shortcomings are absolutely correct however, situations and their solutions are never as easily analyzed as you’ve laid them out here and so they may find road blocks to resolution or conciliation. Let me explain…

My boss is the irritant in this case which narrows my options a bit for finding an equitable solution or collaboration. I have cycled through your last five options several times now over the issue we’re dealing with. Actually, that cycle stops at around step 4 with my boss pretty much blowing me off or ignoring me at step 5 each time.

Collaboration and cooperation is a two way street and one side cannot continue to take hits and make concessions while the other side plays non-conciliation to their advantage, particularly when it’s my job and future that’s in jeopardy.

Here’s another transformative moment lesson I once learned at another job: No matter what game the other person is playing, you don’t have to play. You can always just walk away.

I quit an abusive situation and spent over 10 years making my way back up from it, retraining and retooling my skills to get to where I am now. Unfortunately I have a lot more to loose now than I did back then and because I know I’m right (again), I will fight a bit harder this time to try to get my boss to do the right thing.

But as W.C. Fields once said, “If at first you don't succeed, try, try again. Then quit. There's no point in being a damn fool about it.” So I’m keeping option 6 open and accessible.

I agree that if it's a bad situation to just walk away.

I have heard of people getting fired for things they posted on the internet -- lame but possible.

It's good to remember that if you post to the internet you are posting to the world.

And you know, I did think about that before I hit the Post button. Believe me, I could have put a BUNCH more stuff in there, and almost did, but then I'd have been guilty of sins A, B and C, at least and thought I’d just get to the point without too much whining. :^J

Anyway my boss KNOWS how I feel about our current situation - I've been way up front the whole time - and I think that a lot of what is behind it is my boss' fear that I might leave. There are other factors that secure my employment for the time being also (Union), but you're absolutely right. Silence, or knowing when best to be silent, is an essential part and art of communication too. In the future I will try to be more circumspect, but that post struck a chord and I had to say something!

I’m really glad I’ve found your blog and I hope someday I’ll be working in a situation where the kind of communication practices you espouse are part of the progressive culture there.

Thanks again and keep up the good work!

Dave, this is an open forum. Please talk as loudly and as often as you want.

I'd rather hear all your thoughts; I wasn't encouraging you to keep silent at all -- I just didn't want to see anyone getting into trouble on my account.

No problem, Dave. I truly appreciate the privilege to comment on your blog. Thanks.

I was speaking in general terms of myself. I've learned in the past that I can have a tendency to speak without thinking, not meaning to cause harm, when I probably should have remained quiet instead. I'm usually hoisted on my on petard in those cases, and I have to remind myself of the old adage: "'tis better to remain silent and be thought a fool, than to speak and remove all doubt."