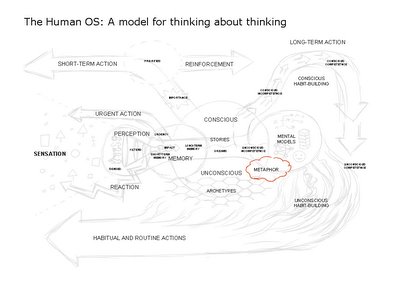 Hacking the Human OS is a series of posts that investigates the mechanics of the human mind. Understanding your Operating System (OS) will help you think better, and help you get better, more consistent results from your interactions with other people.

As a tool for hackers, the metaphor offers both power and danger.

Power: It captivates, engages, and motivates people. Because it tends to trigger an emotional response it can galvanize people into action.

Danger: It's highly subjective and invites cynicism (as in "flavor of the month" and "Who Moved my Cheese?"). It's easy to poke holes in (as in, "That's very interesting Dave, but we're a technology company, not a spaceship").

So what is a metaphor exactly? It's a simple comparison between two seemingly unrelated objects. Hacking the Human OS uses the metaphor of a computer's operating system to represent the mechanisms of human mind.

Metaphors and analogies are like hyperlinks: they are a connection that molds a single thought out of two disparate ideas. You use them all the time without realizing it: for example, for most people up equals good and down equals bad. That's a metaphor.

Metaphors are frequently helpful when you want to explain something, especially when you want to clearly explain not just the facts but what they mean and why they are emotionally relevant. Frequently in business you will see things defined as a battle, or a race, or looming storms, even a tornado.

They are not merely tricks of language; according to two of the most recognized experts on the subject, they are concepts that govern our thought.

"The concepts that govern our thought are not just matters of the intellect. They also govern our everyday functioning, down to the most mundane details. Our concepts structure what we perceive, how we get around in the world, and how we relate to other people. Our conceptual system thus plays a central role in defining our everyday realities. If we are right in suggesting that our conceptual system is largely metaphorical, then the way we think, what we experience, and what we do every day is very much a matter of metaphor."

"To give some idea of what it could mean for a concept to be metaphorical and for such a concept to structure an everyday activity, let us start with the concept ARGUMENT and the conceptual metaphor ARGUMENT IS WAR. This metaphor is reflected in our everyday language by a wide variety of expressions:

ARGUMENT IS WAR
Your claims are indefensible.
He attacked every weak point in my argument.
His criticisms were right on target.
I demolished his argument.
I’ve never won an argument with him.
You disagree? Okay, shoot!
If you use that strategy, he’ll wipe you out.
He shot down all of my arguments."

Here are some other metaphor examples from the same book:

Time is money
Communication is a conduit
Happy is up, sad is down
Conscious is up, unconscious is down

For many people, a metaphor can be a ruling principle or deeply embedded worldview. For example, what is life? People have different metaphors; knowing a person's ruling metaphor can help you predict how they will act in certain situations:

Serious conflict can arise when people's metaphors are not aligned. Part of the problem is that people don't know why they disagree so strongly. This is because even though metaphors have major influence on our thinking patterns and actions, for the most part they remain under the surface, unrecognized. The story of the blind men and the elephant is a perfect example of dueling metaphors.

In interface design we use a combination of office and building metaphors, which includes things like folders, pages, windows and home. Usually new ideas are introduced using metaphors. The metaphors improve adoption and limit thinking simultaneously, for example:

Limitation: For years, photographs were all the same; static portraits and landscapes that used almost all the same conventions.

Here's another example: Are computer programmers engineers, architects or artists? Each metaphor has a different connotation and drives a different pattern of thinking. No matter which metaphor you choose, it will have a tendency to constrain your full potential.

This is especially helpful when you run into conflict, difficult conversations, or have trouble getting a point across.

As a hacker, you can use metaphor to reframe an issue so that people see it in a different light. To change their understanding of an issue, you can "reboot" their OS and build the new understanding on a new metaphor.

Think of a metaphor as X=Y, where X is the thing being represented and Y is the metaphor.

Next, see if you can replace Y by asking "What is an equal or better metaphor to describe the same thing?"

When people have a deeply embedded metaphor that governs their thinking and can't be changed, work with it. Put yourself mentally within their metaphor: Who are the players? What are the roles? Then put yourself in the metaphor and speak from the perspective that will help you make your point. For example, if the metaphor is football (American) you might find it advantageous to take on the role of coach, quarterback or fan to get your point across.

You can read more about this kind of reboot in Metaphor in Mediation, by Suzette Haden Elgin, Ph.D.

You might also try keeping track of peoples' overriding metaphors.

Take note when people have a "life-ruling" metaphor, and try to use the same metaphor when making your points. In your address book, jot down the metaphors you've noticed people use. When speaking to them, "follow the script" of their active metaphor.

Personally I have several life metaphors:

What are your overriding life metaphors? Please share your thoughts.

This talk about the metaphors reminds me of a story a friend of mine told me once (and what are stories but metaphors with proper clothes on).

A friend of mine graduated with a computer science degree and ended up starting an internet café in Lahore, Pakistan. So he’s running this café one day when an old lady walks into the shop and walks up to him and tells him she wants to write a letter to her son who lives in some other country (let’s say Papa New Guinea for conveniences sake).

So my friend agrees to write the email for her and send it of to her son. So he sits her down next to a computer and she starts dictating to him. And when he thinks she’s done he clicks on send and mails it off.

Suddenly, the old lady gets all angry and starts asking him where the letter is gone, she wants to add something, say a proper goodbye. “Didn’t your family teach you how to end letters”, she insists. So my friend offers to send of another email adding the stuff she wants to but she won’t have any of it. She insists that he can run up to the roof and grab the email before it fly’s off. My friend, with his computer science degree, starts explaining to her that email is instantaneous, and it’s already been converted into bits and packets and those are irrecoverable. Angry, the old lady storms off leaving my poor friend sitting at the computer.

Now I understand that the mental model the old lady had in her head was that email was like regular mail with except faster and cheaper. From her point of view what you had to deal with was someone to ‘send’ it that was different than the postman but essentially did the same job. The message itself wasn’t any different because in her perception the medium had not changed. Now what my friend should have said was, like a mailbox once you drop the letter in, you can’t take it out unless you have the key. And that he didn’t have the key. “It’s somewhere in Amreeka” (America in urdu). ; ) …

Life is a metaphor.

Often, it is said:

my life is one big joke, and this... this is the punch line.