A new vision for electronic documents 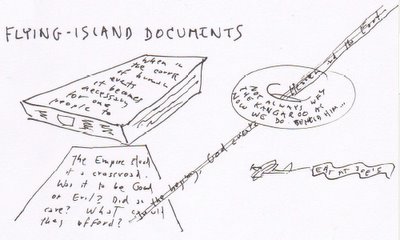 Theodor Holm Nelson, the inventor of the terms hypertext and hypermedia, is on a mission to transform the world of electronic documents.

Here's the problem as he sees it:

"Instead of looking at deeper possibilities for electronic literature, the designers of today's electronic documents have imposed hierarchy and simulated paper. This has drastically limited us. We cannot annotate, we cannot publish side-by-side commentaries, we cannot legally quote at length, we cannot easily see the original contexts of quotes."

His term for the new world is "Transliterature," which he has copyrighted not for personal gain, but to contain what he calls "semantic creep."

Among his ideas are:

Parallel tracks that allow side-by-side comparisons. He sketches an interface where numerous comments are seen next to a document, like overlapping sticky-notes.

Color-coding to track multiple authors in collaborative documents, or where one author quotes another.

Eliminating the clipboard. The clipboard does not retain information about the author or origin of the information it contains. he advocates "pullacross editing" where you pull a text block from one document to another, retaining the link.

Deconstructing documents so that elements (Headlines, text, images, quotations) retain their connections but can also be viewed independently.

"A document is not necessarily a simulation of paper. In the most general sense, a document is a package of ideas created by human minds and addressed to human minds, intended for the furtherance of those ideas and those minds. Human ideas manifest as text, connections, diagrams and more: thus how to store them and present them is a crucial issue for civilization.

The furtherance of the ideas, and the furtherance of the minds that present them and take them in, are the real objectives. And so what is important in documents is the expression, reception and re-use of ideas. Connections, annotations, and most especially re-use-- the traceable flow of content among documents and their versions-- must be our central objectives, not the simulation of paper."

I am strong proponent of paper, especially for visual and creative thinking. I remain convinced that great ideas nearly always start with napkin sketches. In fact, I can't help noting that Nelson himself is a prolific napkin-sketcher and appears to use pen and paper to think about virtual spaces and convey his ideas.

But electronic documents are not paper, nor do they need to be constrained by a metaphor that forces us to treat them as such. I see some potential difficulties in the approach he advocates. For example, color-coding has a built-in limitation, based on the number of colors most people can easily distinguish.

Nelson's vision is an expansive one and I look forward to seeing where it goes.