Hacking the Human OS > How we learn 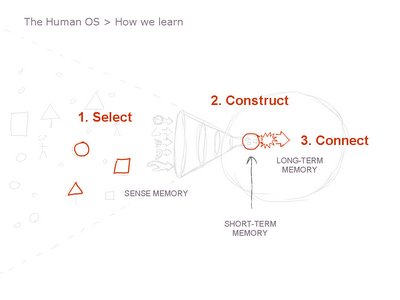 If you want to hack the Human OS, one of the most important things to understand is how human beings learn: There are some basic biological constraints and if you don't understand what they are, you're likely to waste a lot of energy communicating things that either won't be understood or won't be remembered.

According to Richard E. Mayer, before any message or new idea will be fully understood, a person must go through three learning phases: I like to call them select, construct, and connect.

Select: We learn by choice. Attention and interest are critical if you want your message to get through. People begin to learn when they select -- out of the many thousands of sounds and images that surround them -- the things they choose to pay attention to. So first of all, your message must be timely, relevant or interesting enough to be selected.

Construct: Once you have a person's attention, they must take the information you give them and construct a mental model of what it means. Especially if you are communicating something new, this can be a difficult hurdle to overcome. You'll be most effective if you build this model for them or help them build it. One of the easiest ways to do this is to take a model people already know and modify it.

For example, when we helped the Auto-ID Center explain their new radio-frequency identification technology (RFID), it became much easier when we explained it as "the next generation of the bar code." "Bar code" is a mental model that people already know; that is, they understand what it is, how it functions and how it's relevant to them.

Even though RFID was far more powerful and in fact quite different than the bar code, explaining it in this way gave people a starting point that they could build their model on top of.

Connect: Finally, people must be able to link the new mental model with the things they already know. Integrating new ideas with their existing knowledge base is the only way that any new message will become a part of their long-term memory.

As you can imagine, it takes a period of sustained effort and attention for a person to select, construct and connect any new idea to the degree it becomes true knowledge -- part of their long-term memory that forms the basis by which they make decisions and take action.

This is one of the reasons it is so difficult to do anything new.

Next time you want your ideas to take root; when you want people to adopt them and make them their own, remember to help them learn by helping them select, construct and connect.