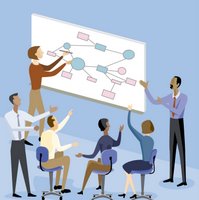 I just arrived in Abu Dhabi for a conference on e-learning, so I don't have anything to post for you today. In the meantime check out this great guest post from Noah Brier, Bringing Brainstorm to the Boardroom:

Walk in stupid
This is one of the five rules of Wieden + Kennedy, by coming to work without preconceived notions you allow new ideas to flourish. Throughout history some of the most unexpected people have solved some of the most vexing problems. That's because so often specialists who all know the same things come to same conclusion. When you bring in someone new who's willing to try new things, who doesn't know this or that method won't work, sometimes they can imagine a completely different kind of answer.

No negativity
This is the number one rule of improvisation. Don't shoot down anyone's idea, instead add to it, let it play itself out and then decide whether it's good or not. What you come up with in a brainstorm is a seed of an idea that needs to be cultivated to grow. You'll never know what that tree looks like if you don't plant the seed.

Cultivate diversity
Mutts are generally healthier than pure-bread dogs because they have a much wider range of genes. Ideas work the same way. The more different the people are who are working on an idea, the more diverse their experiences, the strong the idea can be. When everyone brings something different to the table, you can be sure an idea won't be one-dimensional. Someone will be willing to ask the "stupid" question, someone else willing to make the "stupid" suggestion because they don't know any better. (And because there are no stupid questions or ideas in brainstorms!) But it's those kinds of questions, which may seem obvious to some, that can lead to innovative ideas.

Remember: big ideas grow, they don't hatch
I've written about this in the past, but it's important not to forget that big ideas must evolve into being. They don't just happen all of a sudden. Too many people think that they just hatch out of thin air, already fully developed ideas, instead of trying to come up with small ideas and working them, massaging them and cultivating them into big ones. By creating a culture where this is understood, people will be more willing to just throw ideas out there without fear.

Stay small
Keep a brainstorm small (I've found around eight people or less is best), creates an atmosphere where everyone has a chance to make their voice heard and a group who can move quickly from idea to idea. This, however, is the most difficult rule to translate to a large company. After all, by definition, a big company is no longer small. But that doesn't mean they can't act that way. What makes small companies so successful is their ability to move quickly and encourage ideation to flow from the bottom up, better utilizing a staff of smart and talented people. These ideas can be translated, but it's probably one of the most difficult thing a big company will face. Many look to Google, who allow their employees to spend 20 percent of their time working on their own projects. What this does is create a corporate culture where ideas flow from the bottom-up, just as they do in a small company, as opposed to the top-down. When employees feel involved in the process it's good for everyone: ideas tend to be better than those that come out of the boardroom, employees are happy with their contributions and turnover rates are lower.