The four toughest talks in business 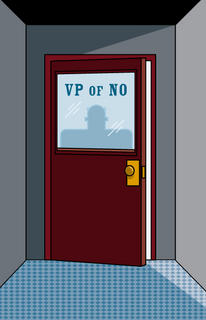 "Your palms are sweaty. Your stomach is in knots. Sitting at your desk, staring at your screen saver, you play out scenarios that rival your worst nightmares. Before the day is out, you must force yourself to start one of the toughest conversations in business: 'I'm going to have to let you go.' 'I want a raise.' 'I've made a terrible mistake.' 'Boss, I can't do this.'"

Fast Company introduces us to Bruce Patton and Doug Stone, two of the Harvard Negotiation Project's directors, who believe that "intimidating exchanges become productive only when you overcome your dread."

"All tough conversations put you on the defensive. Your job is to switch to offense and work toward a solution that satisfies both sides. To do this, you must understand four truths of tough talks:

1. Straying from the real issue will always sabotage your mission.
Defense: You've decided to ask for a raise. You feel confident. You've had a great year. But your team leader fires back at you by recalling a less-than-stellar project you headed up six months ago. Suddenly you find yourself debating your role in the project.
Offense: "Most people go into these conversations thinking that they must be perfect to get a raise," says Patton. "That's not true. You must use some kind of an objective standard, such as comparisons with people who do similar jobs in-house, to prove you're being paid less than you deserve. That's the only issue being negotiated."

2. The future is more important than the past.
Defense: You've just lost the account. You've been reamed royally. Now what?
Offense: "Refocus the conversation on the future," says Stone. "Discuss ways to prevent the mistake from occurring again. This is the subtext: 'Yes, I messed up. But I'm good at my job, and I understand how important it is to get things back on track.' You're showing leadership."

3. There's no anesthesia for the pain of a difficult conversation.
Defense: You've just fired an inept but well-meaning guy in accounts services. You feel awful about it, and now you're trying to find something to say that will lift his spirits.
Offense: "It's not your job to persuade the guy that things will get better," says Stone. "Your job is to let him go. His feelings are immaterial to the outcome. If he says, 'I'm hurt because you were my mentor,' then that is something to talk about. Tell him that you're also hurt, because he let other people down. Sharing views is important. But you can't take responsibility for changing his feelings."

4. Defending the weak parts of your argument is a waste of time.
Defense: Fear underlies all difficult conversations -- people are afraid of sharp rebuttals and an argument's repercussions.
Offense: In any tough conversation, no one is 100% right or 100% wrong. "Each side has weaknesses, and you must admit your own shortcomings," says Stone. "That way you won't put a lot of energy into defending your weakest positions when you start the conversation. Acknowledge the problem. Take responsibility for your fair share. Focus on the solution -- that's what keeps you centered."