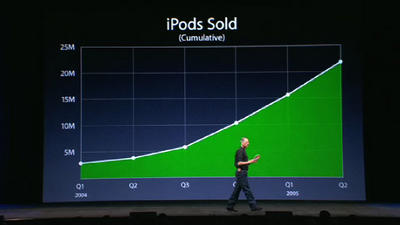 What makes Steve Jobs such a great presenter? It's not complicated, and, with practice, you can do the same things he does to make your presentations more effective.

- Prepare carefully. It's clear in every presentation Jobs gives that he has thought carefully about his audience, his message and the main points he wants the audience to take away. Yet as prepared as he is, he still feels completely natural, as if he's having a conversation.

- Create drama. A presentation by Steve Jobs is not just a speech -- it's an event. And the world watches. When he wanted to show how the Motorola iPod phone worked, he acted it out onstage. When he introduced the iPod nano, he pulled it out of the smallest pocket in his jeans.

- Make it personal. Jobs puts himself out there for his audience. In a recent speech he spoke about his unwed mother, his adoption, dropping out of college and his bout with cancer.

- Have fun. Jobs' passion comes through in every word. He's having fun and it shows.

Here's a post on the subject from Presentation Zen; it's called Steve Jobs does it again:

"...take some time to watch how Steve Jobs used slides to support his presentation in yesterday's special Apple event at San Francisco's Moscone West. Your own style and use of visuals will be different and unique to your own situation, of course. But I think we all can learn a lot by observing Jobs and being mindful of his natural interaction with the audience and his visuals as he tells 'his story.' "

Here are some great additional points from David Crow's review of this article.

I started to watch the the presentation, thinking I was just going to watch a minute or two. I am now 15mins into it and I will probably watch the rest of it because I am drawn in.
The other thing is you are experierencing something new along with Steve. Of course Steve has already played around with frontrow, but when he was doing it, the audience was exploring the videos, music and pictures right with him.
It reminded me that front row isn't the focus, it is just a way to deliver all of the cool things that is already available. Instead of just a one-way presenation, it was almost 2-way even though I am just watching a quicktime video.

I agree with Rob.


Don't we wish all of our presentations were like Steve's?

I found this today:

It is a long read but it brings up some great points.

Dave, I'm glad you've pointed out Jobs style. I think it's worth noting that he does not use bullet point slides that are then read verbatim, like so many hundreds of PowerPoint disasters we've all sat through. Also, if you compare his presentations to the press vs. developers, you'll notice he's very aware of what the audience is interested in.

He really is a great presented. Very well prepared. A lot of preparation goes into each intro. He was very careful and thoughful in his iPhone presentation, nothing left to chance. Also i think another secret is this: he doesn't rush.