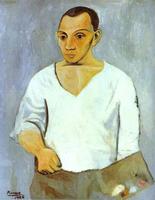 Picasso is reputed to have said

"When you begin a picture, you often make some pretty discoveries. You must be on guard against these. Destroy the thing, do it over several times. In each destroying of a beautiful discovery the artist does not really suppress it, but rather transforms it, condenses it, makes it more substantial."

My friend Jan Adkins once described the same principle. He called it "Kill your little darlings."

The principle is the same for any kind of creative work, whether it's designing a bridge, building a website or developing software. Often the thing that you love the most is the thing that's holding you back. The reason is that in your heart, you don't believe you have the ability to do it again.

Take a deep breath, kill it and start fresh. It will always return, often more elegant and beautiful than before.

I've often felt this, especially when I'm writing (poetry or lyrics), but also with more pragmatic work, such as memos or User documentation. Sometimes I let it hold me back, sometimes I recognize the need and plunge ahead.

Good Post - thanks for the validation of this principle.

This is a wonderful concept. So glad that you've been able to condense it into such a succinct description and way of referencing it with a memorable phrase.