A group of one 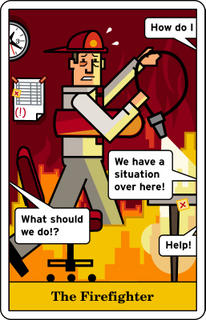 My friend Richard Black, Technology Strategist, just recommended a series of articles about social groups that relate to my concept for a better kind of email. One of the articles which I found especially intruiguing is called A group is its own worst enemy by Clay Shirky. I’ll summarize the article, with some of my thoughts below.

The very cohesion of groups seems to be driven by a few simple dynamics, noted by W.R. Bion and captured in a book called Experiences in groups.

The dynamics Bion identified are:

A compelling part of Shirky’s article is about the idea of “attack from within” as a key vulnerability that any group must recognize.

I immediately recognized the symptoms above – especially “attack from within” as closely related to the problems I have had trying to be more productive with email. Attack from within can take many forms: You can discuss an issue to death; stall an issue by stretching out the calendar or with a lengthy email trail; ignore an email, etc.

I found out at one time about an unwritten rule in my own organization: “If Dave asks you to do something, ignore it. When he asks you the third time, he really means it.”

You can imagine how frustrating this was for me and what a damper it put on my productivity.

Many people are working on group collaboration or communication tools.

This is great, but I like to think of my email as an individual productivity tool; one that leverages the power of groups.

My idea is that the individual makes the rules for their “group of one,” by which I mean, begin with the idea that the individual wants to be productive with his email; that he wants to generate meaningful results (whatever he means by that). Then, with the help of a “productivity system” he can categorize email responses by how much or little they help him achieve that end.

This is not only true for managers but for everyone who wants to increase productivity. Business life is made up of not only direct reports but promises, commitments, and requests; communication with suppliers, peers, internal and external customers.

As both a CEO and a Consultant to business leaders, I share your pain!

It's true that not only have I run into that same rule within my business (when mark says something the 3rd time, he probably wants that sucker handled!), but I've also found myself falling into that same vibe with a client or two at times.

Is it because our relationship has become colloquial, and the closer we become, the less urgent their requests?

Is it a result of us "getting away" with a missed deadline, and seeing that the client/boss/partner didn't disintegrate?

You'd think the Priority indicators provided in our respective email clients would be enough (and sometimes, that's all it takes).

Maybe there's another way... a smiley that's more personal... a CC that's to the boss... a team mate who is reliant on the Weak Link pulling their respective weight.

I'll ponder this and get back with you... a great opportunity to attack a real work-escalation issue.